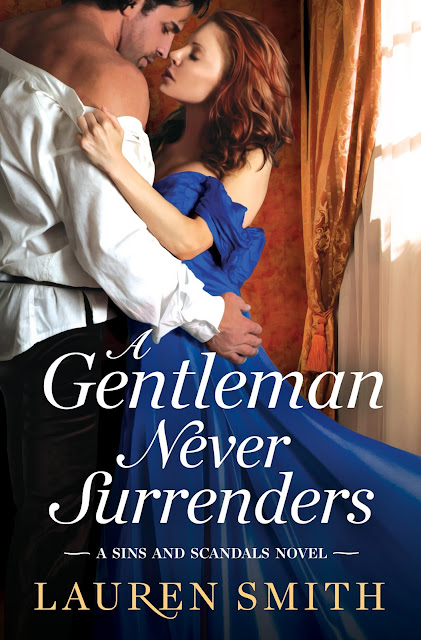 A Gentleman Never Surrenders
(Sins and Scandals #2)
By Lauren Smith

Love is worth a little scandal. Owen Hadley needs a wife. Preferably a wealthy one. Alas, there aren't a great number of heiresses willing to marry a rogue of no particular fortune---luckily, if there is ever a gentleman capable of melting a lady's chilly heart, it's Owen.

Milly has had enough of the marriage mart. If matrimony means giving up her freedom for a foppish husband, then society can take their idea of marital bliss and toss it. But when the ton's most notorious rogue mistakenly makes his way into her bedchambers, Milly finds herself unexpectedly and unwillingly at the altar . . .

Yet the more time she spends with her new husband, the more Milly starts to wonder if the marriage she never wanted may be the best thing that's ever happened to her. Now it's up to Owen to convince Milly that what started as a mistake is anything but---and that every night with him will be more wonderfully scandalous than the last.

One of Five ARC's for A Gentleman Never Surrenders