Who do you trust, and who do you love, when the secrets of your past are so painful that you’re Hiding Away?
Jane Whitford had everything she ever wanted, at her fingertips, when it was violently ripped away. The man who was supposed to love her turned into a monster. Broken and bruised, she fled his clutches back to her hometown. Love is the last thing she wants when she meets Cal. The only thing on her mind, is fun, and lots of it. Will she open her heart to him before it's too late?
Calvin Charles is a cop on the streets, working hard to achieve his goal of joining SWAT. He strives to live with no regrets and has everything he needs; friends, family, and the occasional woman to warm his bed. Until he meets Jane, and she quickly becomes everything he wants. Will he be able to get her to open up when she’s convinced that exposing her secrets will cost her his love and respect?
Will his love be strong enough to survive? Or will her secrets be the death of him? 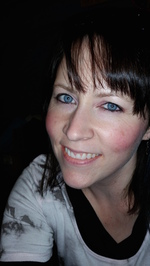 Residing in Metro Detroit, International Bestselling Author J. M. started writing poetry and short stories as a young girl. Rediscovering her love of reading, after having her fourth child, she started writing again. She also works full time as an Office Manager for a large landscaping company.Letting Go, her first publication, was released in December 2013 and My Secret Submission, her 9th, was published in May 2016. She enjoys music, time with friends, sarcasm, concerts, spending time with her children and husband, traveling, and getting lost in a good book. And if you ask nicely, she might show you her flogger and let you sample it.